This article is based on the opinion piece published in The Hill Times, March 26, 2021, entitled “Zero fossil fuel dependence by 2050:  Canada needs a national commission”

Canada’s dependence on fossil fuels is both a blessing and a curse: the oil and gas sector currently delivers massive economic benefits, but with an environmental sting that precludes its expansion as global targets for greenhouse gas emissions (GHGs) tighten. Recently, the discussion over a future pathway to a low-carbon economy has, unfortunately, ossified. The decision by Canada’s Supreme Court confirming the Federal Government’s authority over the carbon tax legislation is indeed a helpful, welcome and a necessary step. However, it is not sufficient to release us from the politics and economics of our continued dependence on fossil fuels.

We need new ideas; not only to aim for a ‘net-zero emissions target by 2050’, but also for a future without fossil fuels. This is a broader perspective moving beyond compliance with the Paris Climate Change accord to address multiple interconnected threats arising from climate warming, the health of the economy, and national sovereignty.

It is true that fossil fuels have been woven into our collective and economic wellbeing. The oil and gas sector is responsible for net exports in the order of $90 billion (CAD) annually, attracting significant levels of capital investment (in the order of $35-40 billion annually), creating high value jobs (60% of jobs in Canada’s energy sector), and contributes direct and indirect taxes to the provincial and federal governments ($15 billion annually).1 Alberta stands as a unique province with its dependence on the oil and gas sector, yet the threat of disruption to this sector is now real: it arises from technological developments that undermine the use of fossil fuels, shifting global markets, divestment, and forcing capital markets to take a dim view of the holdings by investors in the oil and gas sector.

In short: to believe in a future of increasing demand for Canada’s high-cost oil resources borders on the delusional.

Despite its inexorable decline, climate change risk has been reduced to a very narrow debate over the efficacy of one economic instrument: carbon. ‘Put a Price on Carbon Emissions!’ and voila, the answer will yield the solution to climate change writ large. This is a recipe for disaster. Although a price on carbon is one part of the climate toolkit, we cannot rely on it to solve a complex problem2 that requires a fundamental transformation of a major industry sector in our economy.

Although Canada’s fossil fuels consumption profile (“within country’) is large, when combined with exports of oil and gas, our contribution to the global carbon burden is not trivial. Whereas the decision3 by Canada’s Supreme court provides a foundational floor, or a ‘book-end’, to the legal debate about specific powers of the Federal Government to enact legislation to regulate emissions for compliance with international obligations, the more difficult task is the ‘bottom -up’ transformation of our economy. Creating ‘zero dependence’ on fossil fuels requires a national political consensus. The legal strength of the Supreme Court’s decision does not provide any respite from the winds of party politics and the ‘ying-yang’ see-saw of election cycles. The repeal of legislation by a government of a different stripe has been used often; witness Ontario’s 2018 reversal of the ‘cap-and trade’ regime within a matter of weeks upon their election victory; or the Harper Government’s abandonment of the Kyoto Protocol in 2011. Concerted efforts by industry and lobby groups for retrenchment will become increasingly vociferous and challenging over time.

We believe an independent evaluation of our potential economic futures, like the Macdonald Commission of the mid- 1980s, can provide the appropriate vehicle facilitating a deeper national conversation sheltered from the politically heated debates of the day.

A national commission to calm the waters to address competing demands and difficult choices is sorely needed to help de-toxify partisan climate politics. It would allow a diverse set of voices to shape Canada’s dialogue on climate, beyond COVID-19, so as to take a full measure of our national aspirations and challenges over the coming decades. These voices would not only represent well-informed and longitudinal perspectives outside the political frays, but would also constitute a permissive forum for an inclusive national strategic conversation. This could occur without the competing sector-specific mandates that pose limitations on even the most senior civil servants asked to take on the same task.

A wide-range of practical solutions needs to be explored, taking into full account the national capacity for change in a changing world, the adverse impacts on communities, the health of the bio-physical environment, sociocultural issues, and economic sustainability. Deep analysis, in terms of risks and trade-offs in following a potential different number of pathways towards a sustainable and progressive rebuilding goal must also be considered in order to produce an achievable, rather than an aspirational, framework document.

The Corporate Sector: Risk or Opportunity?

Climate change regulation is not the only threat to corporate bottom lines. Accelerating trends towards the destruction of oil-based products is clear and will become more evident over time. A global transition towards cleaner energy sources is underway that includes low cost, non-carbon sources of power generation, the electrification of transportation, a full pivot by the automotive sector away from gasoline-powered cars, the implementation of smart and intelligent systems for energy use in new buildings, efficiency improvements and innovations across every industry sector, and growing consumer awareness of the price of our carbon footprint in our daily lives.

Predictions of the sudden demise of the oil and gas sector are not warranted, but a credible scenario is now emerging which will render large portions of Canada’s current oil and gas sector assets non-economic. In other words, fossil fuel resources will be stranded in the ground. This gathering storm of dis-use means only one thing; that Canada’s fossil fuel resources and existing operational assets will not be worth what they are today, their economic value declining dramatically over time.

We have little choice but to imagine a future with zero dependence on fossil fuels; it is only a matter of speculation whether it will be 2040 or 2060.

Leaving behind our oil sands and petroleum exports may seem, as first sight, to be a preposterous idea. But how often today do we hear anything about Canadian coal? It took an ‘All Party Select Committee’ of the Ontario Legislature, circa 2000, to put an end to coal generation in Ontario through legislation4,5 and Alberta has taken the necessary steps to exit coal generation before 2030. The German ‘Coal Exit Commission’ relied on a wide and inclusive civic consultation to pack up the nation’s coal industry by 2037. The recommendations of the commission have now been enacted in German Law with an explicit consideration of the total costs, in the order of 50 billion Euros that include provisions for support to affected communities, environmental remediation, and payments to investors6,7.

What Germany demonstrated through its national experience was the ease with which piecemeal, and what are often called short term initiatives, can be organized into coherent long-term programs of reform. In pursuit of visionary ends, such national initiatives must transcend the bounds of electoral timeframes and gain cross-party support. As we have witnessed in the past, the outputs of independent commissions can provide such credibility and legitimacy, facilitating a longer-term policy agenda and a process for managing the inevitable negative social, economic, and environmental impacts at the local community level.

Why an independent commission?

For Canada to get to a zero-fossil fuel economy, an independent National Commission like the MacDonald Commission – to chart the course for an economic transformation – is necessary. A full and wide-ranging discussion of Canada’s place in the world, enlarging the scope of debate to address additional national concerns such as, for example, security challenges emerging over Arctic sovereignty and control over navigable waters, is required. A potential unintended outcome of the climate threat is that northern issues will gain central prominence.

If the effort towards undertaking white papers on national security or a Canadian foreign policy is anything to go by, consolidating key stakeholders who have the expertise and sectoral-based leadership to contribute to this critical analysis and subsequent planning may not be straightforward. We have already been outpaced by our two closest allies, the United States and the United Kingdom, in even considering a new, more suitable, foreign policy and national security direction for Canada. Consider, for example, the pace with which US National Security Adviser, Jake Sullivan, leads a new US national security policy. It is described as being virtually indistinguishable from an economic policy, and one which will influence US foreign policy priorities of securing resilient supply chains and pursuing access to ‘cleaner’ technology resources.8

At a time when Canada – having experienced the scourge of the COVID-19 pandemic – still appears reluctant to discuss far-reaching foreign policy and international security objectives, it thereby risks failing to secure a relevant position amongst its multilateral partners. We need to ‘bring something to the table’ to support international collaborative efforts. Only then will we be taken seriously as a strong, versus weak, middle power. While a detailed road map for reducing emissions from each economic sector has not yet been set down by the United States, the Biden Administration does have broad “multiple paths” to achieve this goal.9 Prioritizing a Review to inform such a roadmap for Canada would assist us in keeping up with the Biden government’s fast-paced determination and take full advantage of the new Roadmap for a Renewed Canada-US Partnership, announced in February to support whole-of-government efforts in support of national prosperity.10

In our view, the use of fossil fuels and their consequential impacts on GHG emissions is not just a matter of a carbon tax and its finer adjustments. The complexity of the related issues calls for a deeper civic engagement away from the rhetoric of partisan politics. To avoid any further inflammation of the political discourse on the climate file, one ‘low-decibel’ option is an independent commission to address the central national challenge: good governance for economic prosperity, enhanced environmental performance, and a just and equitable transition.

A solid first step in that process would be adopting our suggestion of a national commission. We recall the Macdonald Commission and its mandate:

In hindsight, it could be argued that the Macdonald Commission’s major contribution was largely collective self-education, to help us step back from the political process and take a long view of national development.

Amid ensuing debates on national security and foreign policy is the goal of net zero emissions by 2050 – a goal which props up our two most important security interests: the protection of our territory and the protection of our population. With experts already suggesting that the next ‘black swan’ – an unpredictable yet influential event – could stem from a climate-related ‘punch’ in Canada’s Arctic, the country must demonstrate both preparedness and the capability to respond to such climate uncertainty. Without preparedness or capability, we cannot defend against these primary security threats; and without being secure, we put at risk our sovereignty.

We recommend a non-partisan, expert-based MacDonald-type Commission to de-toxify the carbon tax and climate debate and create a space, post-COVID, for civic engagement with a positive purpose. This is a critical, timely initiative, warranted for three compelling reasons:

(i) Canada ranks highly, globally, as a producer, exporter, and consumer of fossil fuels (oil and gas) with this sector playing an important role in the national economy;

(ii) Canada’s overall global carbon footprint, both as a consuming and a producing nation of fossil fuels, is high, with ‘over-sized’ contributions from producing regions, and this in turn has the potential for;

(iii) political discord and exacerbating cracks in our national unity – and, therefore, national resilience. Therefore, a national dialogue is what is needed now; a way of seeing that incorporates multiple perspectives that speaks to our shared future. 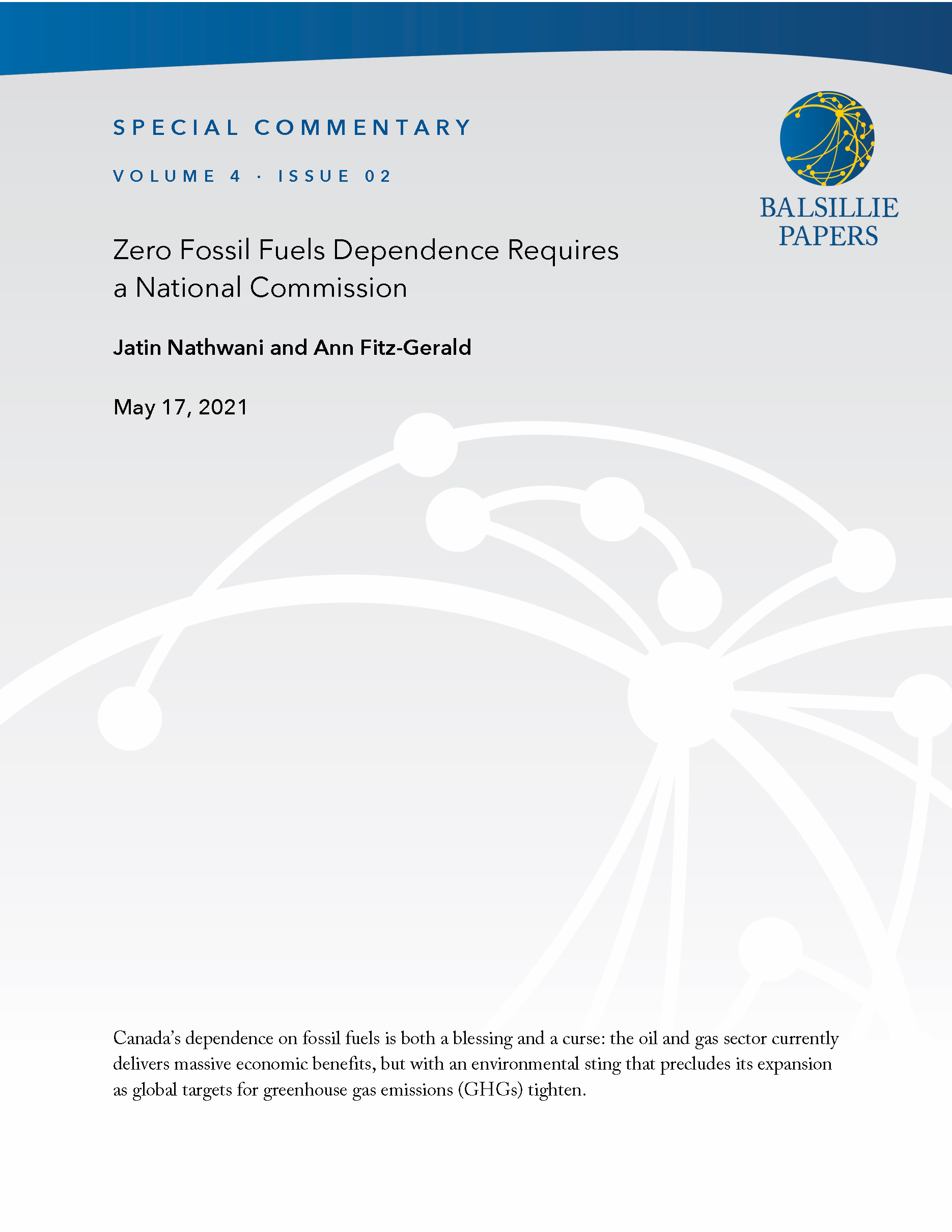