Any EU decision to ban imports of Russian natural gas is now past the point of relevance given that Russia will either limit or cut off gas supplies entirely. Cutting the gordian knot of EU fossil-fuel dependency will be a positive outcome that stops the transfer of wealth sustaining the Russian war efforts. Simultaneously, a unique opportunity emerges to develop and enhance a resilient power grid for the future. Re-directing natural gas supply from power production to other sectors such as industry and homes helps reduce the disruptions created by energy shortfalls, and effectively breaks the dependency on (Russian) gas. Without massive inflows of income from energy exports, Russia’s capability to prolong a war of attrition will denude over time, and paradoxically, this can become a potential path for peace.

The Russia-Ukraine war raises the question: what should the EU do with its energy infrastructure and fossil-fuels? We argue against massive investments in additional natural gas infrastructure for increasing supply – more pipelines, more LNG facilities, more storage – as the solution to the deficit of gas supply arising from the current crisis. A head-long rush to a massive investment in the natural gas infrastructure would be a mistake of historic proportions, repeating the same error of policy and diplomacy that resulted in the dominance of Russian gas in the first place1. Substituting suppliers for the same fixation on the same commodity – whether it is gas from the US, Middle East, or North Africa – simply creates path dependency, ‘locking-in’ fossil fuel use for the long term. In sharp contrast to recent commentary2 focusing on increased gas supplies from non-Russian sources, we propose a strategic shift away from gas to electricity as an answer to the crisis.

Displacing gas with electricity offers a fundamental and strategic shift to diversify the EU’s energy supply base, laying the groundwork for a low-carbon future. Expansion of electricity generation, transmission capacity, and interconnections, allow access to multiple sources of supply such as wind, solar, hydro, nuclear, geothermal, and bioenergy. The unique technological attributes of different supply sources when combined with geographic flexibility becomes a unifying force in lowering geopolitical tensions and promoting electricity trade on a continent-wide scale.

A coordinated EU response to the energy crisis will not be enough on its own to strengthen the European electricity network. Ultimately, new investments – promoting moves away from gas and into the power sector – become the foundation for a climate-friendly energy system of the future.

In this paper, we argue that the near-term impacts on the EU arising from a lack of Russian gas can be managed without dramatic impacts on industry and domestic homes. Several interlocking adjustments and steps, combined with capital investments for network expansion and generation supply in the electricity sector, would allow deeper electrification of the economy and is also a fruitful pathway out of the crisis because it will help to meet climate goals.

The strategic shift involved here is to reduce gas demand in the EU power sector by a large amount, and, to the largest extent possible, across all sectors. The European Commission plan3 for a more ‘affordable, secure and sustainable energy’ to make Europe more independent from Russian fossil fuels is therefore engaged, and recent analysis4 confirms that although such an approach is needed, it is not aggressive enough to address the impending climate crisis.

Why is this sudden strategic shift so challenging? Eliminating natural gas for electricity generation immediately has not been explored by the EC or others. To address the challenge for meeting the EU’s gas supply needs for the next two winters (2023 & 2024), we propose re-directing gas supply away from the entire fleet of gas-powered electricity generating devices, allowing for maximum flexibility to help meet critical industry needs and winter home heating.

As shown in Chart 1a, the European Commission proposal to reduce dependency on Russian gas by two-thirds at the end of 2022 from 155 billion cubic metres (bcm) to 101bcm is primarily based on increasing supply of LNG, pipeline gas, and biomethane 63bcm, and by reducing demand by 38bcm. However, such reductions are only modest tinkering in relation to the scale of what is truly required. Unfortunately, Europe now faces an imminent energy crisis with the potential for no gas supply from Russia, creating a shortfall of 155bcm. The immediate actions required to manage such a scenario is shown in Chart 1b. The gas inputs to the power generation sector – except for peaking and grid balancing purposes – based on the current share of electricity production from gas, reduces demand by 120bcm. Additional gains of an 18bcm reduction are from efficiency gains and other proposed measures by the EC. Such a strategic shift effectively addresses the core of the challenge. 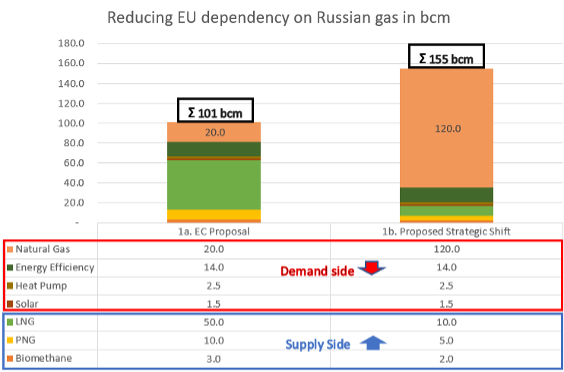 Can Electricity Supply Fill the Gap?

Currently, one fifth of the EU requirements for gas inputs supply to the power sector. Without jeopardizing grid stability, approximately 120bcm can be ‘ring-fenced’ for use by industry, homes, and other critical sectors of the economy. Such a strategic shift – a ‘smart gas strategy’ minimizes the supply chain’ shocks to industry and the heating needs for homes, hospitals, and other critical needs for the operation of the economy and society. Thus, diverting gas from the power sector is the key consideration. The challenge then shifts to the electricity sector to help meet the diverse needs of the economy. As shown above, a total of 138 bcm or 90% of the Russian gas supply shortfall is a demand-side solution to the crisis that focuses on efficiency gains and substitution of low-carbon technologies such as heat pumps and solar roofs and EVs. Most of the options proposed to date continue to rely on increasing gas supply that maintains the status quo and continued dependency on the fossil fuels.

Charts 2a and 2b show the current EU Installed Generation Capacity (950 GW) and power production in 2019 was 2900TWhe. In 2021, the share of natural gas in power production was 557 TWhe or 20 % of the total. Reducing natural gas inputs to the power sector (120 bcm)5 translates into an adjustment of electricity generation and delivery capacity equivalent to 59 GW or approximately 6% of the existing total EU installed capacity of 950 GW. 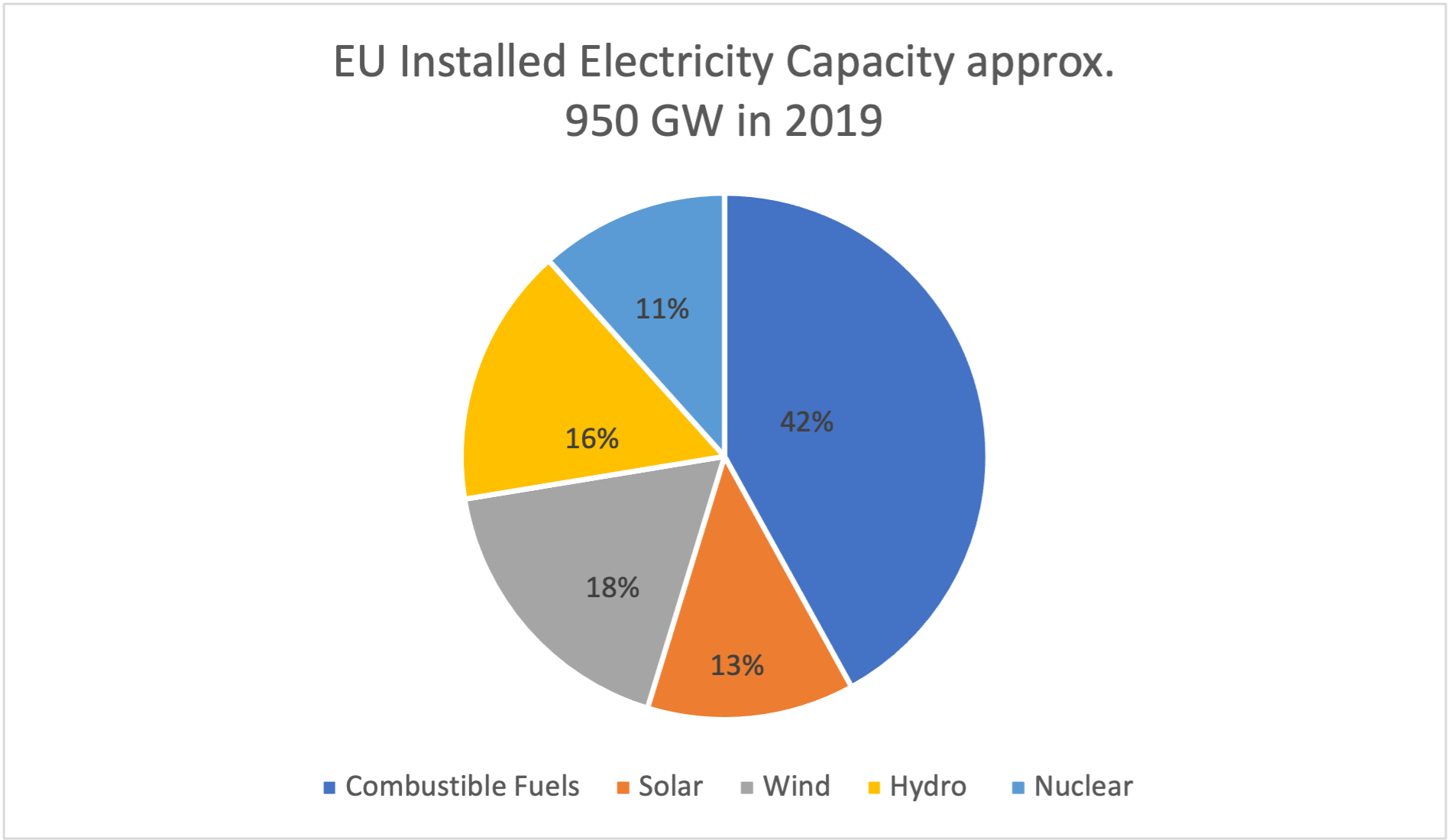 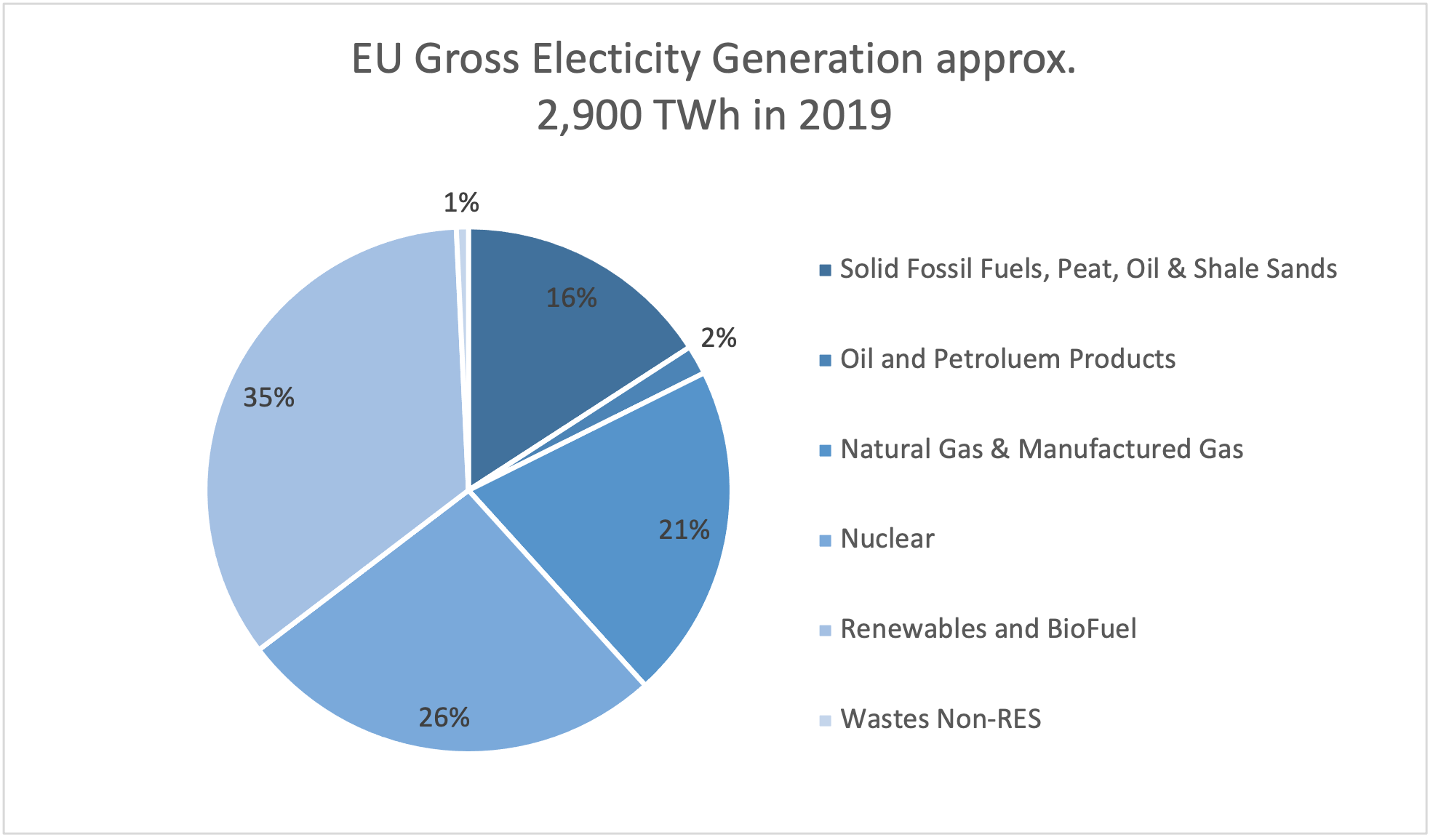 Three possible paths can deliver 59 GWe (6% of total EU capacity of 950 GW) between now and Winter 2024.
Considering an impending military and/or climatic crisis, the first action for the EU would be to accelerate the deployment of all new renewable energy capacity, and push for more effective utilization and improved load factors of existing operational generation capacity.

The second set of actions include the acceleration of activities for the completion of facilities in the construction phase, and reducing the burden of planning and permitting processes for the expansion of major transmission and interconnection capabilities (Chart 3 below for projects under construction and permitting)6.

The third set of related actions focus on operational adjustments. An EU directive to the electricity system operators would be to review the technical basis of system adequacy requirements and a consideration of reserve margins for generation capacity across the EU. A detailed analysis of reserve margin capacities and a time-specific targeted allowance for reduced reserve margins during periods of high demand (e.g. during severe winter conditions) would allow a substantial increase in the availability of the EU power generation fleet to help meet demand. 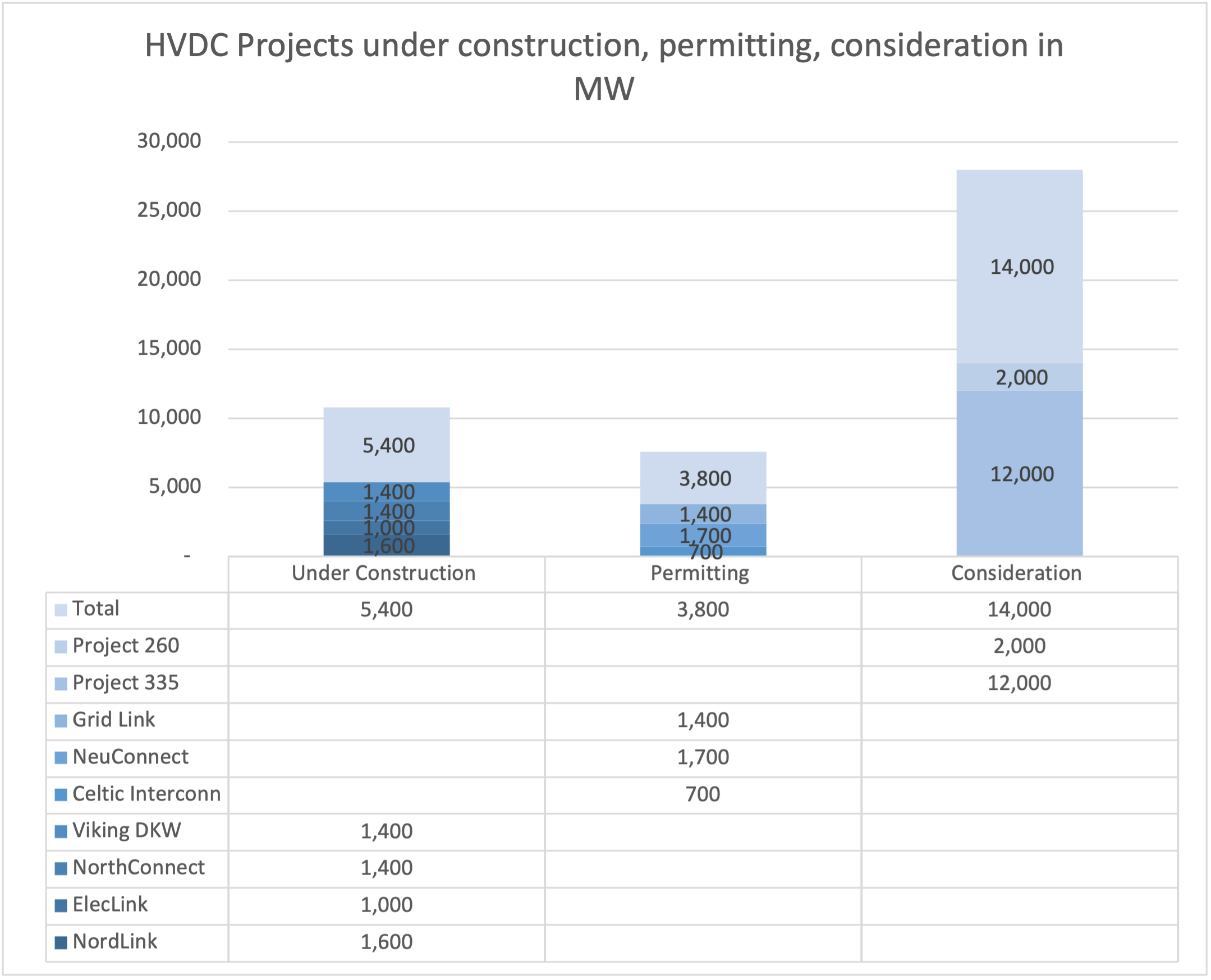 Chart 3. HVDC projects under construction, permitting, and consideration on MW

One additional important operational adjustment is Europe’s Clean Energy Package (CEP)’s minimum 70% target for electricity interconnector capacity for cross-zonal trading. This target can be increased to operationally safe levels of up to 80%, thereby allowing actions to be diligently exercised by all Transmission System Operators (TSOs)7.

Thus, as part of the EU’s vision to create a single electricity market, the current Russia-Ukraine military crisis must be an opportunity to advance the use of Single Day Ahead Coupling8 for this purpose. The EU has the underlying market management infrastructure to ‘stress test’ this, and to enable it.

An effective response to the present gas crisis in the EU is, therefore, a strategic shift that diverts its available natural gas supply away from the power sector, focusing instead on electricity. This option is operationally achievable and is a workable response to the crisis for the next two winters (2023 & 2024). For time frames beyond two years, the certainty required for attracting investments in the expansion of the electricity network and its capabilities to support rapid electrification of the economy is an added benefit. This strategic shift is also consistent with long term scenarios that forecast an increasing share of electricity in final energy consumption, increasing from the current 20 percent to 50 percent by 20509.

Developing multiple sources of power generation, combined with an expansion of transmission capacity and interconnections, thereby offers an increasing diversity of technologies going forth, and accommodates any remaining limitations and shortcomings of a reliance on any one option. It also introduces a geographic flexibility across the EU, and allows for a cost-effective optimization of the energy supply mix.

If the EU is to meet its climate targets by 2050, and if it is to break the stranglehold that Russian natural gas currently holds over the union, there must be new and immediate investments in strengthening an integrated power network that is capable of fostering enhanced electricity production, distribution and use of low-carbon energy. A reliable and a resilient power network becomes the backbone of electricity trade on a continent-wide scale for Europe and this is the best option for EU’s future economic prosperity, social cohesion and political stability. Further build-up of the gas infrastructure and “locking- in” highly priced inflexible ‘long-term’ contracts for gas supplies is a step backwards in terms of both climate goals and geopolitical energy dependencies. 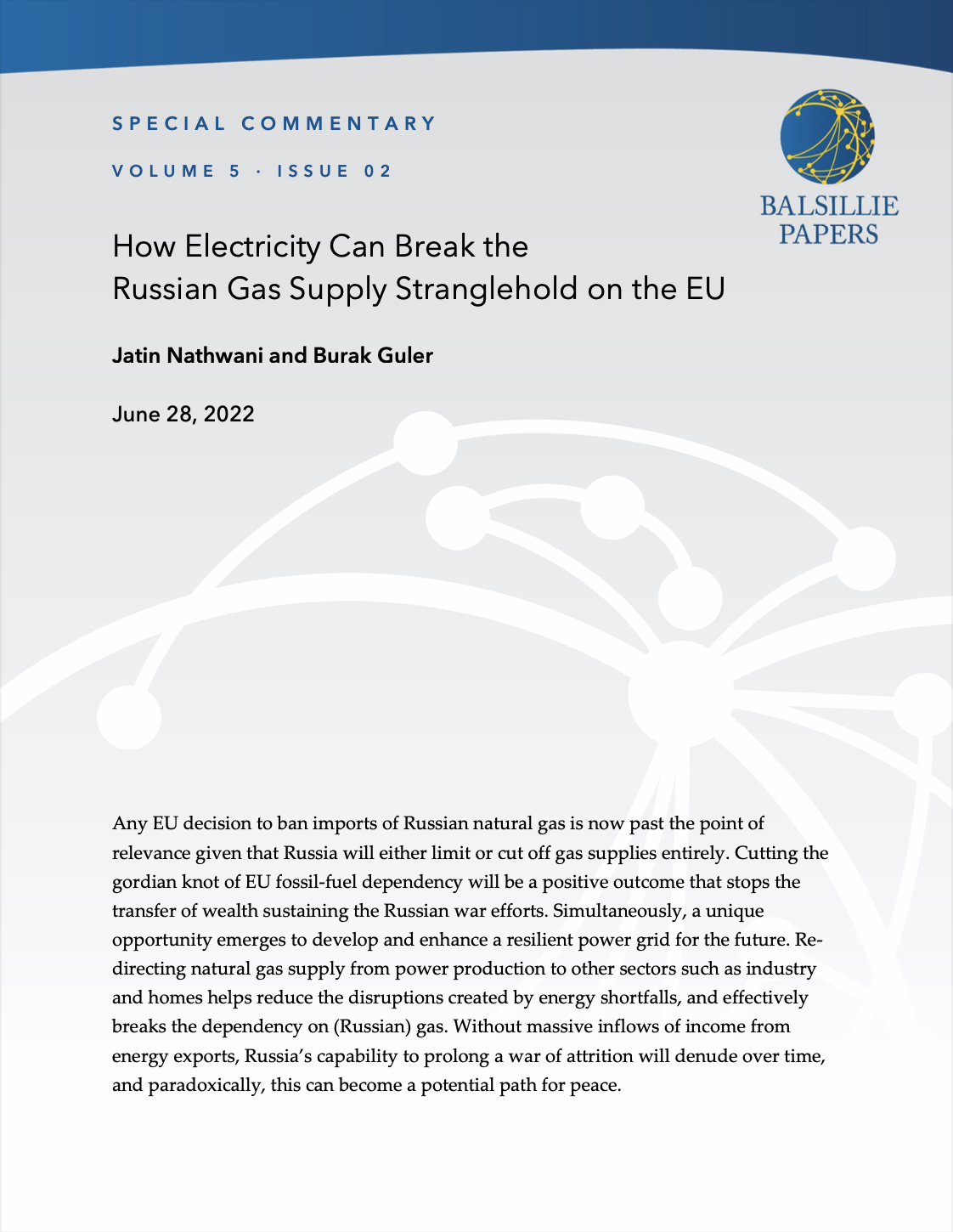