The unprecedented global shut-down due to the pandemic of COVID-19 is exposing public health system weakness globally.1 In COVID-19, we are facing a virus to which we are immunologically naive, and for which it is complicated to determine an accurate case fatality rate, but we do know it is higher than influenza and more serious for the elderly and those with co-morbidities.2 There has been some variability in national government responses to the epidemic, depending on public health resources, but testing, contact tracing and containment using quarantine and isolation of the infected, and social distancing to limit spread, are the main approaches. Their relative effectiveness can be seen in the Financial Times data on national infection and death rates associated with COVID-19.3

It is clear that in the chaos and confusion of shut-downs and shut-ins, the public have become acutely aware of what is important to them. Jobs that are usually deemed low pay and low value have become essential to the public’s sense of security. Grocery store clerks, care workers, nurses and hospital cleaners have all suddenly been seen for the important work they do to maintain human systems of biological survival.4 In this moment of unprecedented crisis, health-care workers, the equipment they need to do their work and a coordinated international response have become the front line in coping with the pandemic. As countries struggle to “flatten the curve” of the rate of infection, it is becoming clear that we need to support front line health-care staff by reorganizing work processes so we do not expose vulnerable older and health-compromised workers at this time of acute health crisis.5 It is worth examining the roles and struggles of these heroes of the current pandemic in more detail.

The World Health Organization’s (WHO’s) primary role is to direct and coordinate international health within the United Nations system, including health systems; health through the life-course; noncommunicable and communicable diseases; preparedness, surveillance and response; and corporate services. Health systems include human health resources — that is, the number, qualifications and distribution of appropriate health workers. Numerous studies show evidence of a direct and positive link between numbers of health workers and population health outcomes.6 Nurses represent the largest occupational group in health globally, two-thirds of whom are women, and their role is fundamental to achieving various global health and development strategies.7 Considering this, it is fitting that the World Health Assembly has designated this year, 2020, as the year of the nurse and the midwife.8

Understanding the significance of health-care workers during this pandemic means we need to recognize how they are made vulnerable by policy decisions. In the United States it has been argued that physician and other health-care worker burnout is more appropriately viewed as “moral injury,” since these workers struggle to provide patient care in a national health-care system that is broken by profit-driven business models.9 Austerity exacts a similar toll, as was made evident in Toronto’s experience of the severe acute respiratory syndrome (SARS) epidemic in 2003. Austerity policies turned nurses into vectors of the SARS virus, since the majority of nurses were not employed full-time and in order to earn an adequate wage they were working at several part-time jobs.10 In moving between different hospitals, the nurses transmitted the virus. A similar situation played itself out in Seattle’s first COVID-19 outbreak at a Life Care Center nursing home.11 These nursing homes are among the United States’ most understaffed and underfunded, where care workers typically work several jobs in nursing homes across the city. Early spread of the virus may have been linked to workers moving between these locations. Under-investment in health and long-term care effectively undermines infection control and exposes health workers to increased risk.

Front line health workers are some of the most vulnerable in this pandemic, as one infectious-disease specialist has acknowledged: “For reasons that we don’t understand, front-line health-care workers are at great risk for serious illness despite their younger age.”12 In Spain, 14 percent of COVID-19 cases are health-care workers; in Brescia, Italy, 10 to 15 percent have been infected.13 When the surge of COVID-19 patients hit hospitals, reports described a war-like environment, with staff exhausted, terrified and facing post-traumatic stress disorder as they coped with the horrific reality of having to ration life-saving ventilators.14 In New York, nurses are wearing garbage bags in place of gowns, and reports of nurses contracting and dying due to COVID-19 exposes how dangerous this lack of personal protective equipment is.15 We are even seeing tragic news of nurses committing suicide after being infected by COVID-19 because they fear they may have infected patients.16 While health workers have been widely praised in various public displays of support, there have also been disturbing reports from the United Kingdom of National Health Service (NHS) nurses being subjected to discrimination and violence, and of nurses in the United States being evicted from their homes due to COVID-19 fears.17

In light of the enormous pressure placed on workers during this pandemic, there have been several efforts to expand the health work force. Government calls for retired health workers to return to service have been answered, including 3,000 retired nurses in Ontario who answered the call to work the Telehealth phone lines.18 Some US states are accelerating the graduation of new health workers and using emergency disaster laws to fast-track permits for regulated health professionals.19 In India, the country with the highest number of medical schools, some basic changes to how the Medical Council of India (MCI) licenses new health professions could result in adding 50,000 specialists in anaesthesiology, pulmonology, cardiology and radiology, and recognizing Indians who have foreign medical credentials or who graduated from schools that for various reasons are not recognized by the MCI could add thousands of workers.20 In Germany, Saxony’s regional medical board called for assistance from medical doctors who do not yet have a licence, and received 300 responses, including many immigrant medical professionals.21 Some of these calls for assistance, however, have exposed what some consider a double standard, demanding maximum sacrifice, but providing minimal support in return. In the Philippines, where nine doctors have already died from coronavirus, a recent Department of Health call for “doctors, nurses, nurse assistants, [and] hospital orderlies able, healthy and willing to commit to work in the fight against COVID-19” has been criticized for offering only minimum wage, despite the massive risks the workers will face.22 In the United States, nursing unions are also some of the most vocal critics of government actions, demanding Medicare for all and more effective government approaches to managing the coronavirus pandemic.23

To fight the global pandemic, many high-income nations (those that make up the Organisation for Economic Co-operation and Development [OECD]) are already calling upon what is effectively a global health workforce.24 According to a recent report by the Migration Policy Institute, migrants make up 29 percent of physicians and 22 percent of nursing assistants in the United States.25 In the United Kingdom, 13.3 percent of NHS workers report a non-British nationality.26 In Canada, in 2018, 8.5 percent of nurses and 26.4 percent of physicians were internationally educated.27 This supply is sometimes at the expense of source regions, typically lower-income nations that experience out-migration as a form of brain drain.28 It is worth remembering that while the British are rightly proud and protective of the NHS, its formation in the 1950s was built on the contributions of thousands of Commonwealth and Caribbean Windrush migrants, some of whose families were later subjected to appalling treatment by the UK government, including denial of government services and deportation.29 The importance of immigrants’ contribution to the health-care systems of many high-income nations becomes more ironic when we think about the xenophobic and nationalistic reactions of some political leaders in response to the pandemic.30

In the aftermath of this unprecedented global pandemic and its associated economic, social and political effects, we need to remember the gratitude we have expressed for health workers. We must remember this at election time when we consider political party platforms that boast mandates of tax cuts and “small” government. These promises generally result in cutbacks to health investment, and nurses and other feminized health workers are often disproportionately impacted by these fiscal actions.31 In addition, the place of international migrants in OECD heath-care systems reveals the global sourcing of workers that wealthy countries have long enjoyed. That reality demands mutual responsibility to promote and protect global health initiatives, including the support and protection of countries whose public health systems are weaker and less well organized.32 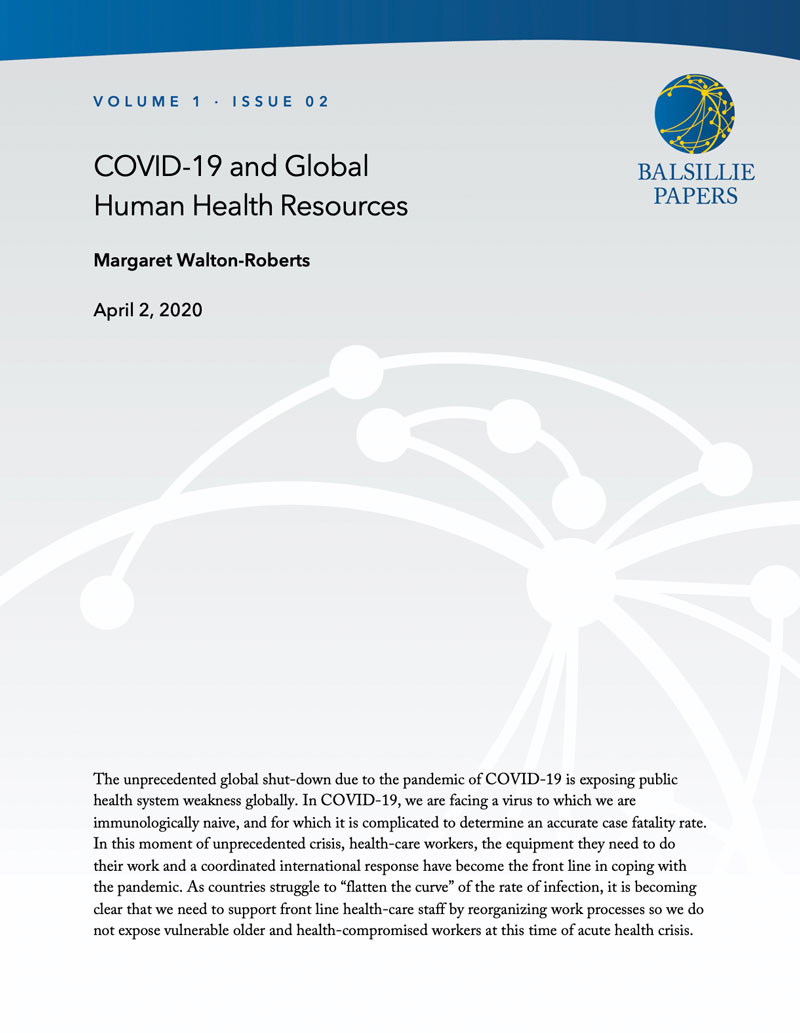