The COVID-19 pandemic has paralyzed the global community, but its impacts around the world have not been homogeneous. Some places have seen only a few cases, while in others the numbers have been significant; mortality rates also differ considerably. This paper looks at a possible reason for this variation, focusing on the age profiles of populations as one significant factor among many. We examine the hypothesis that countries or regions with older populations may have more cases with higher morbidity and mortality. We then draw out public policy implications from this hypothesis.

Backdrop to the Pandemic

In late December 2019, authorities in Wuhan, China, were informed of a new respiratory disease infecting increasing numbers of people.1 They, in turn, notified the World Health Organization (WHO).2 By January 30, 2020, there were about 10,000 cases globally, and the WHO cautioned of a public health emergency of international concern3 — a formal declaration of “an extraordinary event which is determined to constitute a public health risk to other States through the international spread of disease and to potentially require a coordinated international response.”4 As of late May, there are nearly six million cases globally.

COVID-19 originates from a retrovirus that entered humans as a zoonotic disease — a disease that crosses the species barrier from animal to human and then spreads from human to human.5 The earliest cases were associated with a local “wet market” in Wuhan, where live and slaughtered animals, both domestic and exotic, were being sold as food.6 COVID-19 — known officially as “severe acute respiratory syndrome coronavirus 2” or by its abbreviation, SARS-CoV-2 — spreads rapidly between humans, mainly via the respiratory tract through droplets and fomites.7 It presents through a wide range of symptoms, primarily but not restricted to fever, cough and difficulty breathing.8 As time passes, the range of symptoms identified with COVID-19 increases.

Preliminary studies suggest that SARS-CoV-2’s case fatality rate, at 2.2 percent, is significantly lower than that of its predecessors.9 It was 9.6 percent for SARS-CoV and 34.4 percent for MERS-CoV.10 However, the rate remains in flux as the pandemic continues to unfold. The most vulnerable are the elderly (over 65) and those with comorbidities (underlying medical conditions).11 The main comorbidities associated with poor prognosis are cancers, diabetes and hypertension, as well as respiratory, cardiac and renal diseases.12

Several excellent websites are tracking the progress of the pandemic. The one we use most is Worldometer.13 As of May 26, the hardest-hit region is the Americas, with 2,518,852 cases.14 Africa, on the other hand, has relatively low numbers, with only 115,868 cases as of May 26, 2020.15 At this time, it is evident from all aggregated data sources that there are significantly fewer recorded cases in Africa. Is this likely to continue? This question will require analysis in relative and absolute terms.

Since the outbreak, epidemiologists, virologists, public health specialists, policy makers and politicians have been trying to understand the workings of this virus. Although scientific knowledge is increasing exponentially, a great deal remains unknown; the epidemic continues to spread, and the numbers continue to rise.

In general, a COVID-19 infection is counted if verified by a laboratory test. The WHO states a confirmed case is “a person with laboratory confirmation of COVID-19 infection.”16 Initially, the only diagnostic test available was an antigen test that determined if an individual had COVID-19. In mid-May, antibody tests were underway.

What makes COVID-19 unique and a major public health issue is that most people have no symptoms for the first four to five days after acquiring the disease, but may infect others during this time. A key concept here is that infectiousness is measured by the reproduction rate. This is the number of new infections one individual transmits. If each person infects more than one other person, the epidemic will continue to grow. If it falls below one, the epidemic will shrink. Canada’s average reproduction rate was 2.8 in mid-March and now sits at 0.8.17 This number fluctuates considerably between institutional settings and the general public in each province.

Age Composition and Why It Matters

The age structure of a population broadly determines many aspects of society: economic growth, labour force participation rates, demand for and utilization of educational and healthcare services, and housing. Demographers divide populations into three broad age groups: children and young adolescents (under 15 years old); the working-age population (15–64 years); and the elderly population (65 years and older). The age dependency ratio (people below 15 and over 65, as a proportion of the 15–64 cohort) and the working-age bracket are important when creating social policies. The growing proportion of older people is a recent phenomenon in many countries as medical care and standards of living continue to improve and birthrates decline, especially in highly developed countries.

COVID-19 gives new significance to mortality and age. Morbidity (ill health) and mortality (death) increase with age, and in most settings, this is due to non-communicable diseases.19 Globally, the top five causes of death are cardiovascular diseases, neoplasms (cancer), chronic respiratory disease, respiratory infections and tuberculosis, and neurological disorders.

The United Nations estimated that the global average life expectancy in 2019 was 72.6 years.20 Life expectancy in the case countries selected ranged from a low of 60.2 years in South Africa21 (largely the result of the AIDS epidemic) to 85.4 in Italy.22

China, Japan and South Korea, the countries hit first by COVID-19, were able to bring the
epidemic under control with low case numbers.23 When the disease reached Europe, the worst-hit countries initially were Italy and Spain. At the end of May, the largest numbers of infections are in the United States, Brazil, Russia, Spain, the United Kingdom and Italy.24 The highest mortality rates are in the United States, United Kingdom, Italy, France and Spain. 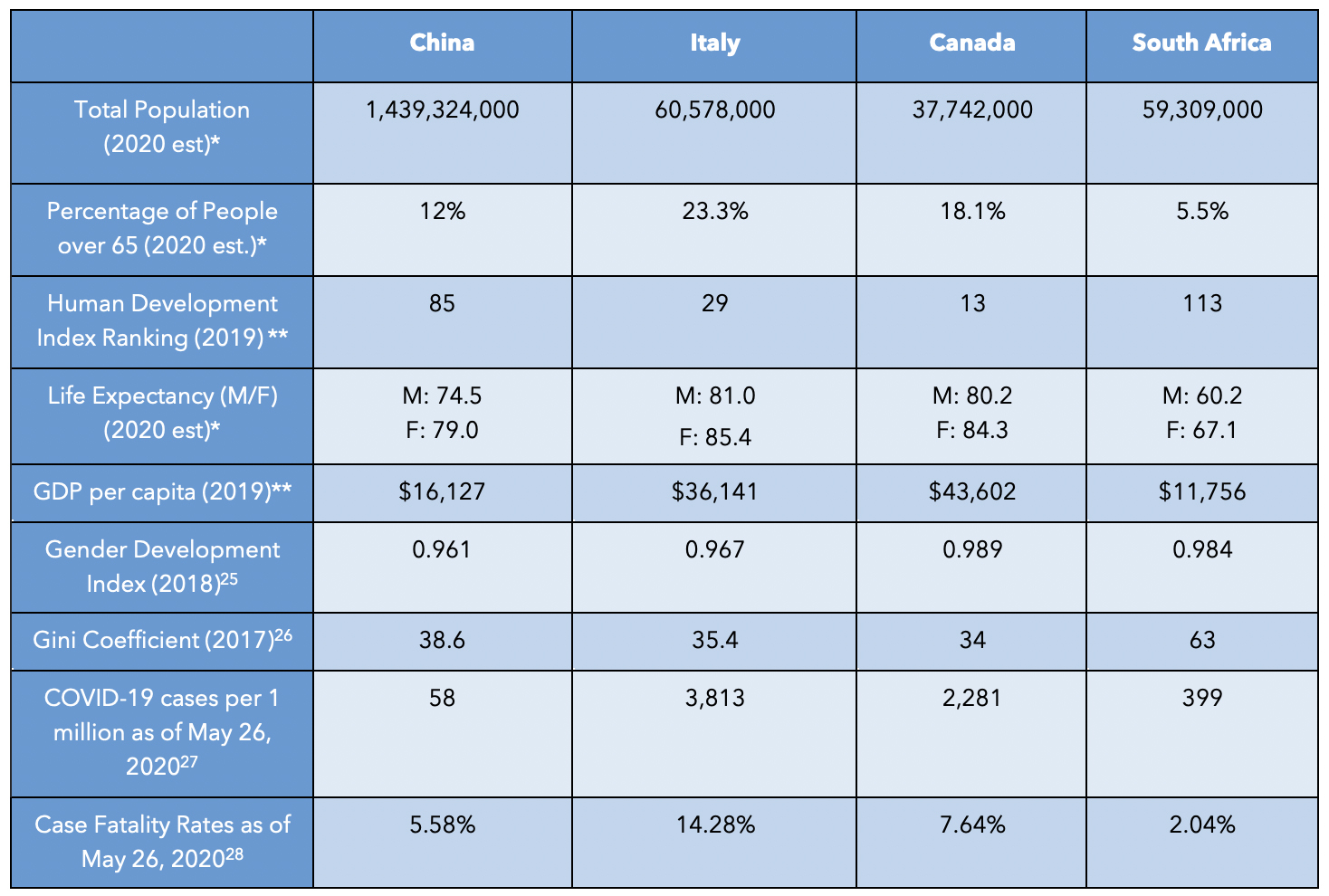 China has the world’s largest population, projected to reach 1,439,324,000 by the end of 2020.29 The median age is 38.4, with a declining growth rate since 2000. The population pyramid (Figure 1) reflects this, as those under 15 years make up 17.7 percent of the population, 15–24s are 11.8 percent, and 25–64s are 58.5 percent; over 65s account for 12 percent and are growing in absolute and relative numbers. The combination of an ageing population and a declining growth rate means increasing numbers in the higher age brackets will require care. 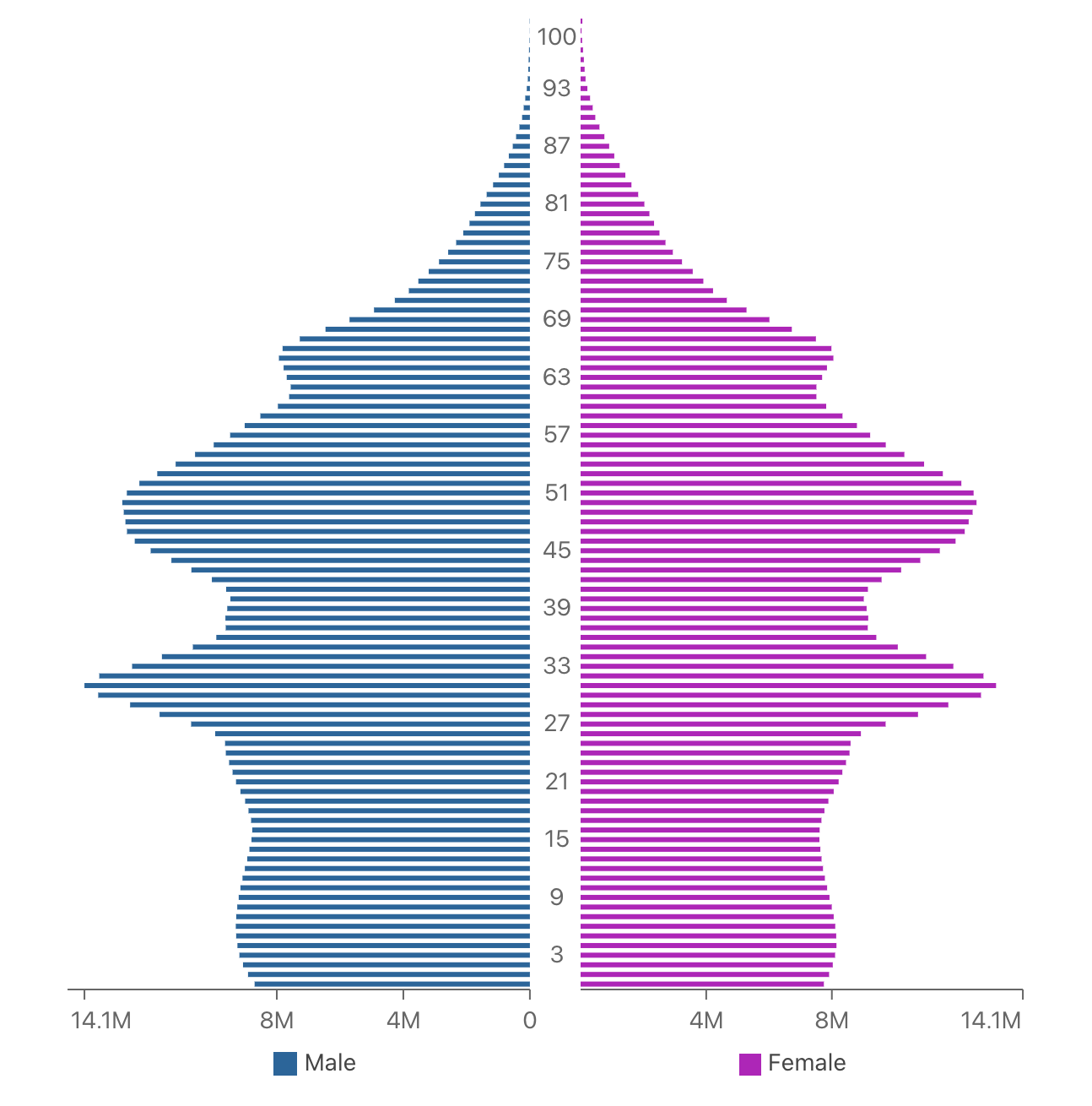 COVID-19 originated in Wuhan, in China’s Hubei Province.30 China recorded its first cases on November 17, 2019.31 The reaction of officials was swift, and the disease remained primarily confined to Wuhan. The number of cases rose to 80,000 by early March 2020; since then, there have been only 2,992 cases.32 Figure 2 shows the distribution of deaths is significantly higher among older populations.33 China shows it is possible to control the epidemic and minimize the number of deaths. 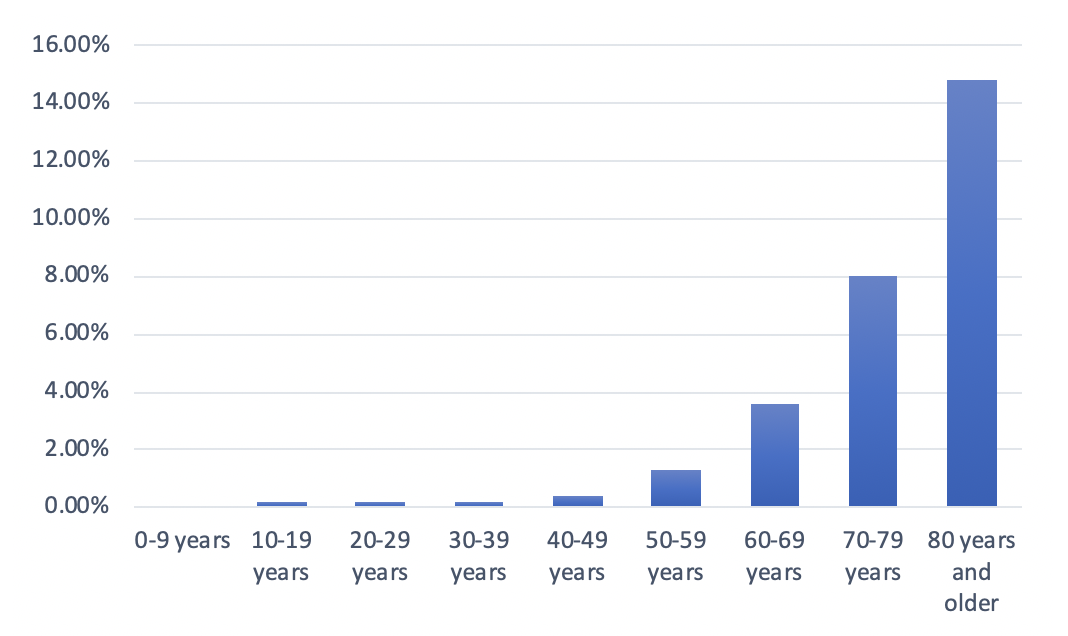 Due to immediate action, the number of deaths remained low; the data suggests fewer than 5,000.34 The average case fatality rate is 5.58 percent.35 This data shows a strong correlation between age and higher fatality rates, despite the virus remaining a controllable epidemic in China.

Italy has the second oldest population in the world. The median age is 47.3 and will increase to 50.8 by 2030.36 Italy’s projected population by the end of 2020 is 60,462,000,37 a 0.15 percent decline from 2019.38 Italy’s negative growth rate and rising life expectancy are creating a demographic crisis. The struggling economy keeps fertility rates down.39 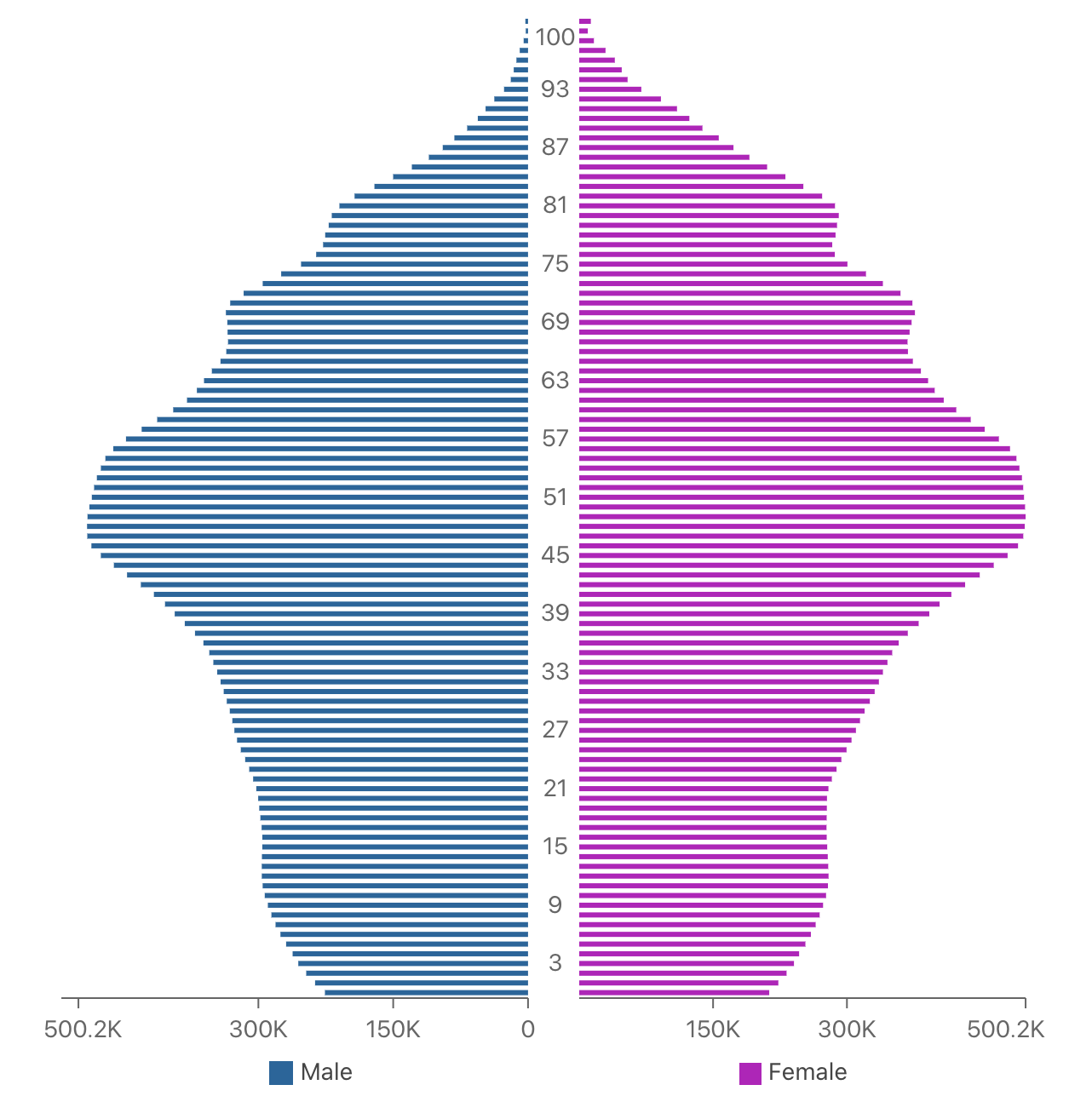 The first case of COVID-19 was reported on February 20, 2020, in the region of Lombardy.41 Italy delayed in responding to the crisis, and the numbers exploded in March and April.42 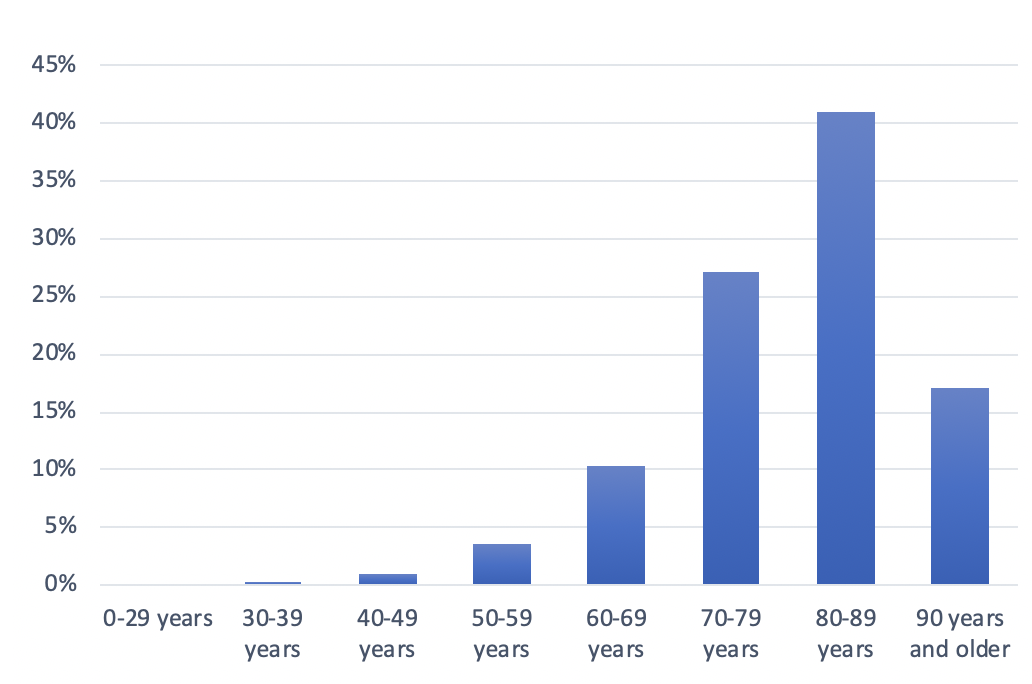 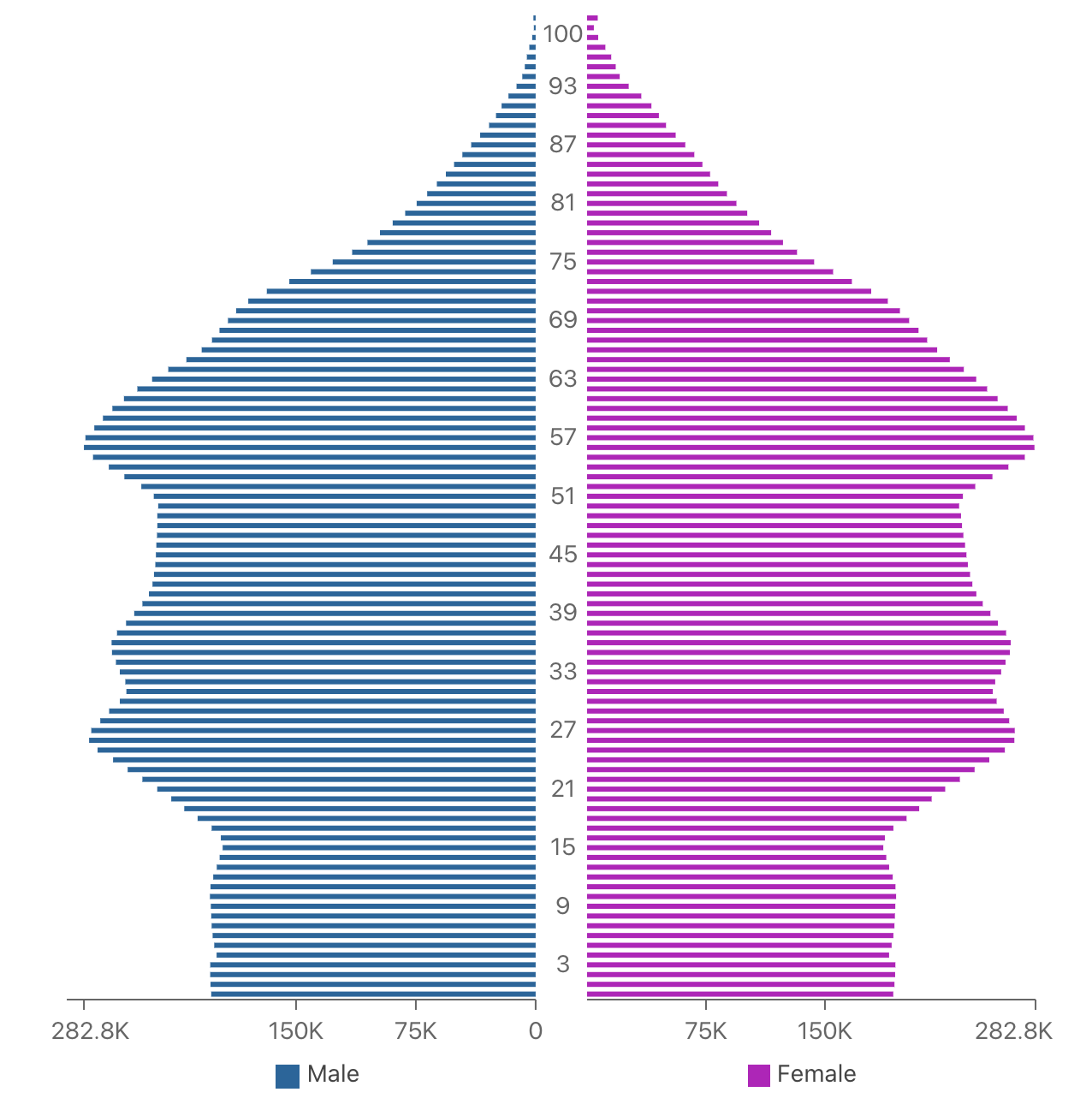 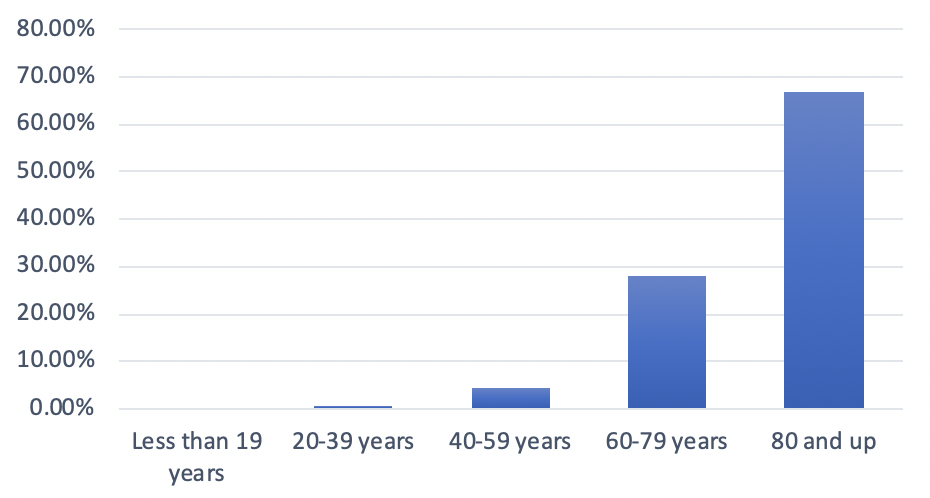 Figure 6 shows high fatality rates among the older age groups. Canadians over the age of 60 accounted for 95 percent of COVID-19 deaths, 66 percent of hospitalizations and 63 percent of cases in intensive care units.55 Additionally, 78.5 percent of the deaths stem from “long-term care and seniors’ homes,”56 especially in Quebec. In late April, around 60 percent of the province’s deaths came from these facilities.57 Canada’s average case fatality rate is 7.64 percent.58 Canada, like Italy, delayed its response to protect older populations.

After exploring the age composition and COVID-19 impacts in China, Italy and Canada, we compare their experiences to South Africa. We posit, like Jennifer Beam Dowd et al., that countries with younger age structures may not experience the same impacts from the pandemic as those with older demographics.59 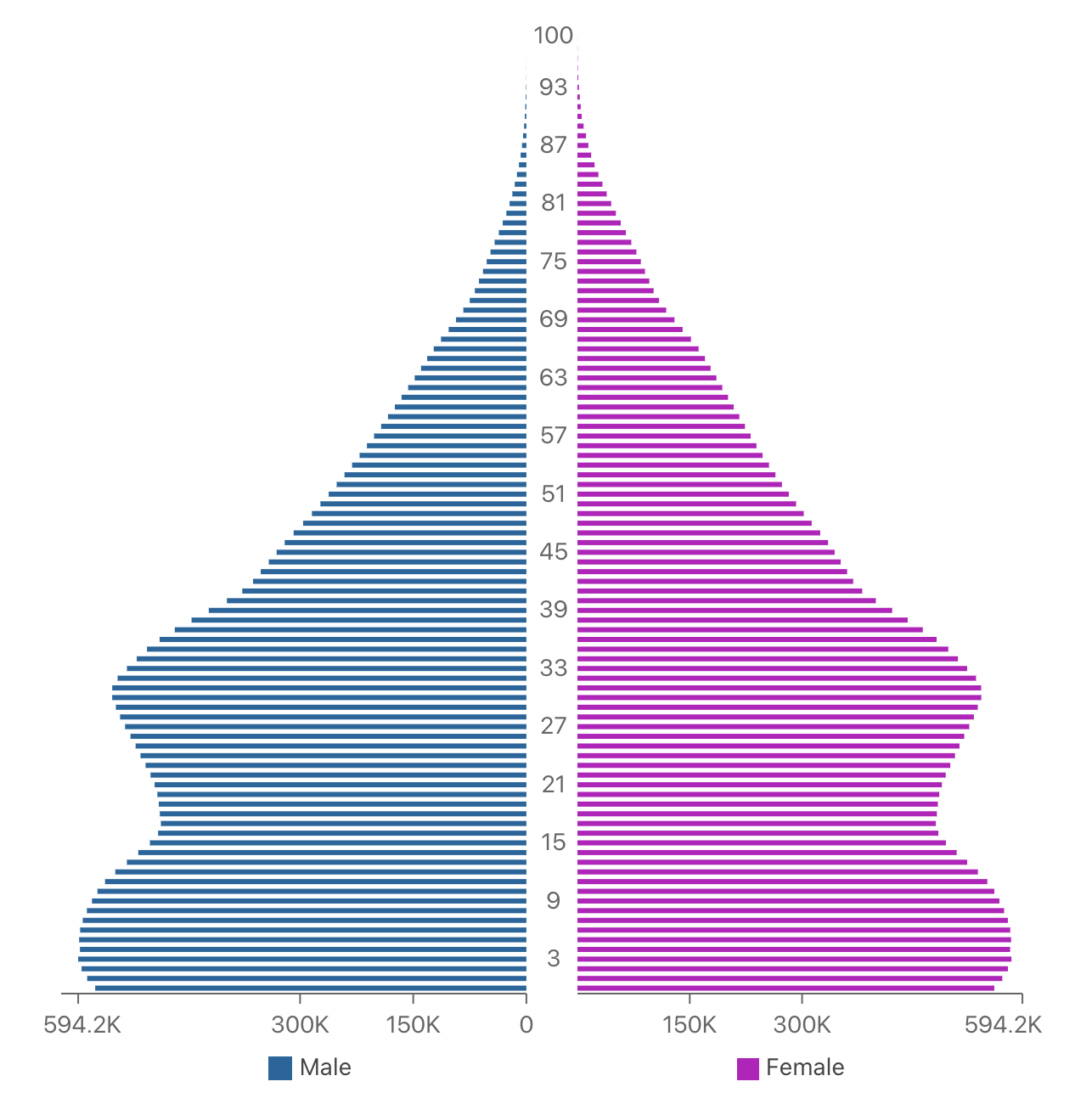 South Africa started to ease its restrictions on May 1, but has seen a steady increase in cases, with 1,160 recorded on May 18.67 Despite this increase, and a total of 23,615 cases reported as of May 26, 2020, there had been only 481 deaths. This translates to a case fatality rate of 2.04 percent, a much lower rate than in some Western nations. 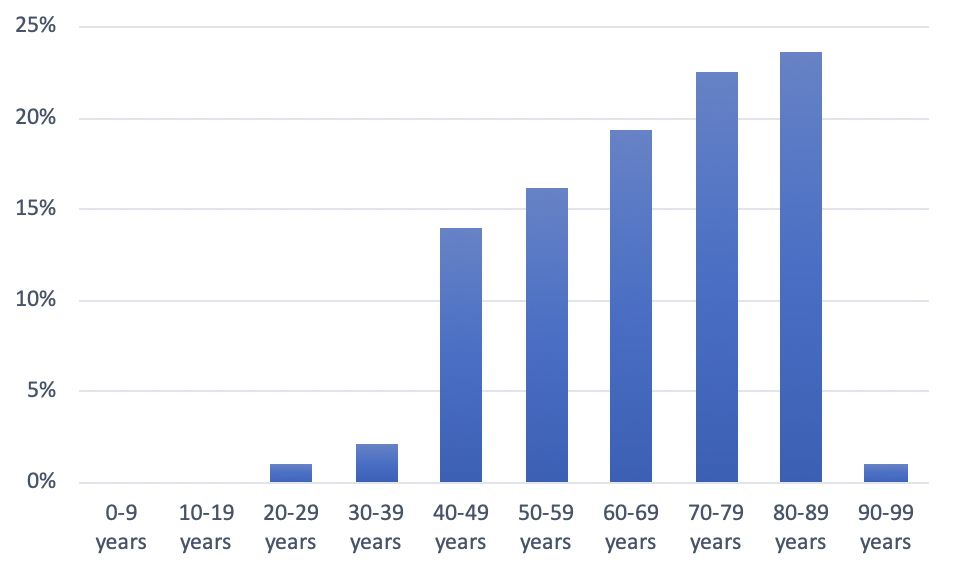 There are several caveats to this paper and its conclusions. The first is that COVID-19 is a new disease, identified only a few months ago, in early 2020. We are not sure how the epidemiology will unfold. Will Africa continue to see fewer cases? Second, most infections are asymptomatic or very mild, thus unrecorded. This lack of data may mean COVID-19 has spread, largely unnoticed, through countries with younger populations.

The data so far suggests that having a younger population is probably a protective factor because there are fewer reported cases and fewer older adults seeking care. COVID-19 will not add significantly to the disease burden.

China, the first nation to see COVID-19, brought it under control and contained it through draconian, authoritarian measures. The experience of SARS-CoV in 2002 provided a template. Canada is a wealthy country with a well-developed public health system, and a small population spread out over a large area. These factors, combined with the SARS-CoV experience, mean that COVID-19 is under control, and the impact is less severe than in other high-income countries. However, Canada provides an example of how specific vulnerable groups can be overlooked and devastated, especially the institutionalized elderly.

This oversight was especially the case in Italy, where the health care sector was nearly overwhelmed. The epidemic rose from 234 daily cases on February 28 to a peak of 6,557 by March 21, and remained high at about 3,000 cases per day until early May.70 COVID-19 has a strong age dependence on the severity of the infection and the risk of death, but high death rates among the elderly are not a given — Japan, for example, controlled the epidemic with an older population. China, Italy and Canada illustrate the vulnerability of the elderly and the need to provide care for them.

The epidemic in South Africa is in its early stages. While South Africa benefits from a youthful population, it also carries the burden of AIDS and tuberculosis, which may prove to be among the comorbidities that increase vulnerability to the virus. Observers and health care providers remain wary as to what the implications will be. Most of the poorer nations of the world, including South Africa, are also dealing with the epidemic of increased poverty as the global economy contracts.

Epidemic preparedness for this virus, and others, should consider the age structure and chronic diseases of the population served by each health care system. COVID-19 is the most severe pandemic to emerge since the 1918 influenza. As zoonotic diseases increase due to myriad causes, the global community would do well to address the underlying conditions that lead to dangerous contacts between animals and humans, while preparing for severe new illnesses and their impacts on human populations. 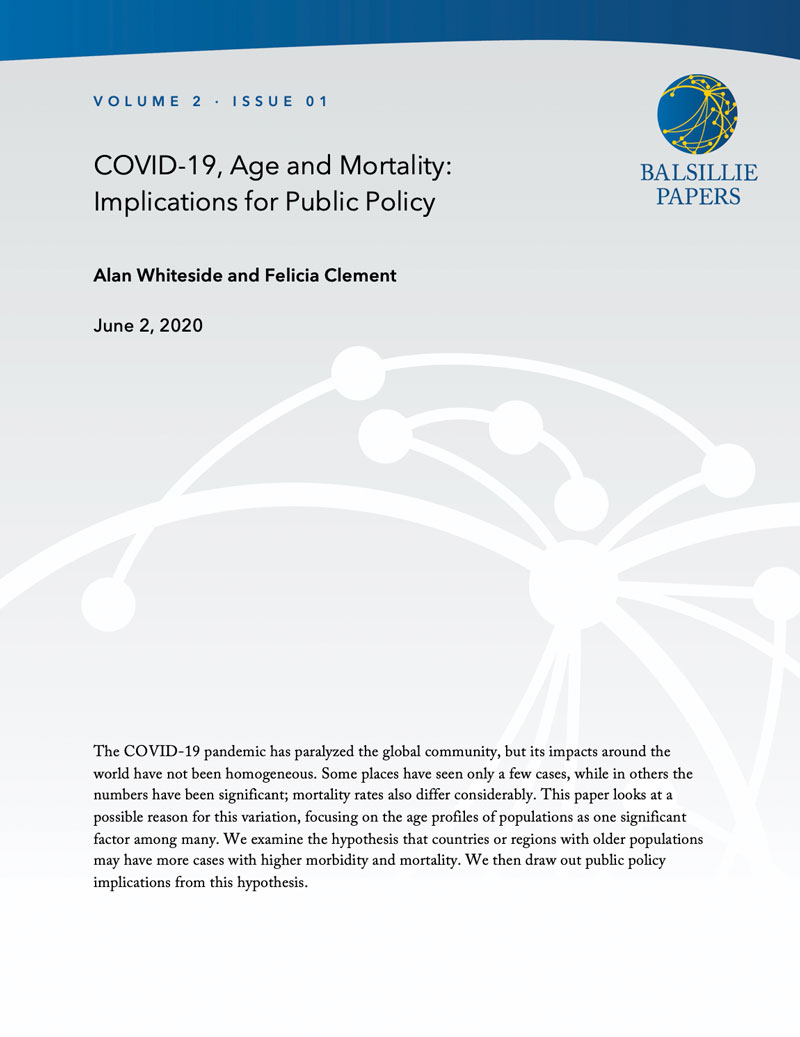